This episode of Luke Cage was full of surprises. With Luke on the run with Piranha, we were treated with a lot of fights and a lot of quiet moments and conversations, as characters we know, or thought we knew, unpack their emotional baggage.

Luke is doing his best to keep Piranha out of the hands of Bushmaster and his men. The two hold up in an abandoned theater where Luke learns why his new client is so important.

We learn quite a bit about Piranha. His mother was a prostitute working for Mama Mabel and he’s known Mariah his whole life, so apparently I was wrong about him trying to scam Mariah out of her money – my bad. His father, we also learn, was a banker who never acknowledged him. I was shocked to see how genuine Piranha seemed to be in that moment, if not a little confused. Granted, this is his hero and he is running for his life, but this sudden genuine emotion doesn’t feel earned. Instead it feels like the writers needing an excuse to get Luke to seek out his father for help.

If I had any gripe about this episode, it would be that. Luke has been getting dealt blow after blow, and it was inevitable that he’d eventually have to face his father. However, the way they executed this felt rushed. I was looking to see a little more hostility (at least on Luke’s part) when his father showed, but they just seemed to roll with it. It seemed almost a let down after building up the beef between them so much.

Next on our list, we have Shades and Mariah spilling their guts out to other people, but not each other. In a shockingly sweet scene, we learn more about the relationship between Shades and Comanche. Though I had realized by this point that the two hd been together since Seagate prison (they are the ones that beat Luke in prison, resulting in him getting his superpowers), I was surprised to finally understand some of the hostility Comanche was expressing towards Mariah. He and Shades were more than just friends back in Seagate, and though Shades insists that “the inside is the inside” and things are different here, Comanche isn’t feeling that. A sudden love triangle? Gasp! 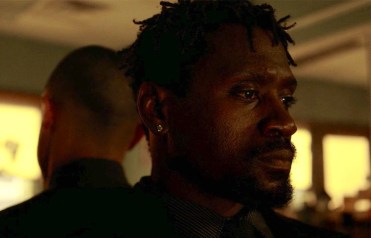 But equally as sweet is what seems like genuine affection and admiration Shades has for Mariah. He confides in Comanche that Mariah is the one who killed Cottonmouth, and taught him that there is a better way of life than simply being a gangster. As expected, Shades has higher aspirations, and the way he talks about Mariah having ice in her veins, sounds like a man talking about the moment he fell in love.

But of course there is trouble in paradise as Mariah doesn’t seem to trust Shades at all.  On the other side of town, Mariah sits in an interrogation room for questioning after the carnage at her FamilyFirst clinic. Here we learn that she and Ridenhour had a “thing” back in high school. He tries to sweet talk Mariah in to talking, offering her protection if she is willing to cooperate, but Mariah leaves and returns to Harlem’s Paradise to drown her sorrows in liquor. When she can get neither her daughter nor Shades on the phone, Mariah breaks down. In another sad scene, Mariah vents to her assistant Alex. Everything she has built is crumpling and everyone she’s ever loved has abandoned her, from Mama Mabel, to her Uncle Pete, to her cousin Cornell, and now Tilda. It was interesting though, when Alex mentions Shades, her reaction is quite indignant. As I thought, the relationship between them has splintered, and Mariah doesn’t feel that she can trust Shades, especially since he was there at Piranha’s party and failed to retrieve him. With her legacy on the line, it is all Mariah can do to trust in her mortal enemy, Luke Cage.

By far, one of my favorite scenes this episode was the Bushmaster’s conversation with his “uncle” Anansi. At the start of the episode, Bushmaster looks on quite proud of the display he put on at Mariah’s FamilyFirst clinic, but his uncle’s vocal opposition to the brutality visibly upsets him. This leads to a great moment where Anansi and Bushmaster argue about Bushmaster’s anger and how his actions affect not only himself, but everyone around him. The violence he openly displays puts all of his “brethren” in a bad light. But Bushmaster cannot and will not let it go, regardless of how it looks. This scene really helps to humanize, not only Bushmaster, but also the people that love and support him. Anansi understands his hatred and his rage, but doesn’t condone it. Bushmaster, to his credit, refuses to let go of his need for vengeance, but at the very least, does not completely shut out those who speak up against him. At least, when it comes to his family.

Misty also get a bit of emotional exposition this episode, as her actions from the previous episode eat away at her conscious. She meets the former police department psychiatrist and confesses what she did. His response was quite simple. There is no telling what is good and what is bad. She simply needs to needs to “go into the basement” – basically, delve deep into the dark recesses of her subconscious, and do what is right for her. Otherwise it will destroy her. In the end, Misty cannot deal with the idea that she may turn into Scarfe, tells Ridenhour about what she did, and turns in her badge.

Although I found Misty’s emotion dumps one of the weakest this episode, I also can admit that it was the most important, if for no other reason than, the conversation she has in the diner is a framework for the entire season so far. Everyone, from Mariah, to Luke, to Bushmaster, to Misty – wrestle with doing the wrong thing for the right reason. The issue comes in reconciling this and understanding why the characters do what they do, and whether they are emotionally equipped to deal with those issues.

That being said, this episode was a good insight to the characters, but though I usually appreciate episodes like this, I found this episode a little disappointing. I found most of the events to be a little rushed. Piranha’s emotional exposition waves major death flags. Luke’s reunion with his father had no sense of catharsis. Also, his behavior this episode, like constantly loosing and having to rescue Piranha, trying to hold on to Piranha as leverage over Mariah without calling for backup, and leaving to have a one-on-one brawl with Bushmaster, seemed uncharacteristically reckless and stupid.

In general, this episode felt a lot like a set up episode for what’s to come, and based on how the episode ended, I’m hoping it’s something good.