There were plenty of laughs to go around this episode as Luke, put in a financial bind due to his sudden legal troubles must resort to entertaining obnoxious fans and partygoers. Meanwhile Mariah is over the moon as her women’s clinic prepares for it’s grand opening, and with no sign of Bushmaster, all seems calm. But you know what they say; calm comes before the storm – and the episode ends with one hell of a shitstorm rolling in. 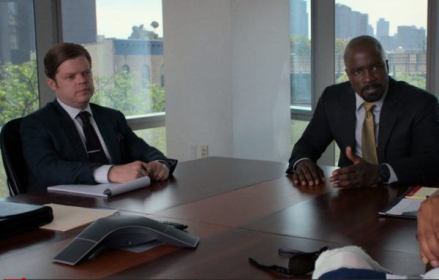 The episode starts with Cockroach and Luke in negotiations. Representing Cockroach is Mariah’s lawyer. Representing Luke, is a fan favorite from the Daredevil series, Foggy. I thought this scene was absolutely hilarious. Cockroach is obviously playing up his injuries and how traumatized he is, but it doesn’t matter. The fact remains that Luke did assault him and if his case is brought to court, it will end badly for Luke. Thus begins Luke’s quest to find $100,000. He tries unsuccessfully to cash in on the deals offered to him by Nike and the football coach earlier in the season but they fall through. With no other way to get the cash, Luke, reluctantly accepts an offer to make a personal appearance. 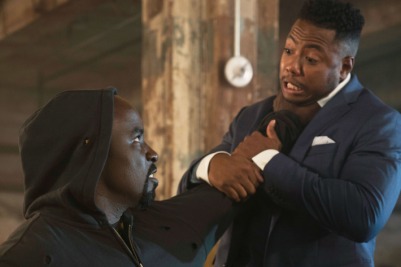 The client is Piranha, Mariah Dillard’s accountant and Luke’s self proclaimed number one fan. Luke is thrown off by Piranha’s creepy obsession with collecting things, but decides to go ahead and do the public appearance after realizing that he has connections to Mariah. From there it devolves into the most cringeworthy, degrading spectacle, as Luke is forced to wear his old bullet riddled hoodie, pose for pictures, and act as a glorified bouncer at Piranha’s party. But things get messy when Luke spots a few shady characters at the party, and after nearly being forced into a disturbing game of “Who Wants to Shoot a Bulletproof Man” fends off the Jamaican attackers when they attempt to kidnap Piranha.

It was cool to see Luke being forced to put his hero-ing on the back burner to make money. The idea of needing to get paid is brought up in the first episode and harkens back to Luke Cage’s original role as a “Hero for Hire” in the comic series. Though that idea seems far removed from the righteous character that was presented to us in season 1 and the first few episodes of season 2, I wonder if they will begin to steer him in this direction moving forward. Surely, it seems that Luke has grown weary of being Harlem’s hero and might be more open to being a Hero for Hire in the future. Other people have capitalized on his name. Why shouldn’t he? 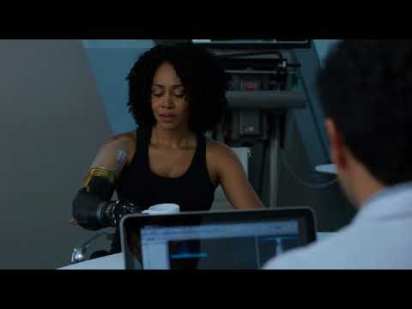 Comic book lovers also got another treat as Misty gets her bionic arm this episode. After getting outfitted with a new arm, compliments of Danny Rand, Misty gets to work cleaning up the mess that she and Scarfe left behind, Cockroach. Misty gets a few moments to shine as she looks for a way to take Cockroach down the right way, and save Luke from having to cough up the cash. She goes over her old cases and interactions with Scarfe, questioning whether her former partner planted evidence to get Cockroach convicted, and whether that was the right thing to do or not. She also has a very powerful scene with Cockroach’s girlfriend. I’ve always admired Luke Cage and Jessica Jones ability to tackle real issues in their series, and this episode was no exception. From issues of domestic violence to doing the wrong thing for the right reasons, Misty is battling a crisis of faith. In the end she decides against planting evidence in Cockroaches home but her presence there reveals a gruesome find. Cockroaches decapitated body.

On the topic of decapitation and doing the wrong thing for the right reason, Mariah is treated to a very nasty surprise upon opening the doors of her FamilyFirst clinic to the press. I thought it was absolutely adorable how genuinely excited Mariah was to show

Tilda the clinic at the start of the episode. Mariah is a great villain because she believes everything she does is for the greater good. This is what I liked about her in season 1. Tilda, of course, has her reservations about diving head first into business with her mother, but it doesn’t dampen Mariah’s enthusiasm about her FamilyFirst clinic’s grand opening.

In fact, when Tilda threatens to leave unless she’s told the truth, Mariah, determined to wash her hands clean of all the dirt, easily and unapologetically tells Tilda every dirty thing she’s done to get the clinic open; from insider trading, to blackmail, to selling off the family’s illegal gun business. She is able to do this so openly because she believes that all these evil deeds are simply means to a greater end, and seems to genuinely want Tilda there to help do good. But it’s hard for me to understand exactly how Tilda feels about all this. Although she seems to put on an air of righteous indignation, in scenes with the two of them together you can often see Tilda nodding slightly in agreement. As much as she would like to seem otherwise, I think Tilda is more like Mariah (and the other Stokes women) then she would let on.

We also get a hint at Shade’s end game. I thought it was strange that despite the intimate nature of Shades and Mariah’s relationship, he wasn’t pushing and manipulating her more to keep Harlem’s paradise and her criminal underworld connections. However, it seemed to make sense after this episode that Shades is making a play to take over her backdoor dealings, gain control of Harlem’s paradise, and let Mariah chase her “legit money” dreams. The hitch seems to be though, that Mariah, despite her eagerness to go legit and secure her legacy, isn’t ready to give up Harlem’s Paradise – a fact that leaves Shades obviously feeling a certain way. But he doesn’t have much time to pout as one of their men, Ray Ray, and Mark Higgins (the man they blackmailed) have both gone missing. Shades needs to get their house in order if they are to take full advantage of this financial windfall.

But will everything Mariah and Shades have done fall apart now that the decapitated heads of Mark Higgins, Ray Ray and Cockroach have shown up on Mariah’s doorstep? I think this will mark the beginning of the end for Mariah and Shades partnership. There is no way Mariah will be able to come back from something like this and the consequences of this PR nightmare and Piranha being targeted spell financial ruin.

But hey, at least Luke’s getting paid!