So, I’ve been away for a while.

I’ve had quite a lot going on in my life and as I worked towards getting my business affairs in order and writing new stories, I’ve felt guilty from my lack of posts. So I thought, why not do a Bad Movie Night Review? Nothing too big. Just something to get my rage juices flowing.

Life is going too well for me, so why not hurt myself?

Man did I make the right choice.

“Woody Woodpecker” is a 2017 feature film based on the popular cartoon sketches of the 1940’s and 90’s. The titular character, Woody the Woodpecker is the psychotic brain child of Walter Lantz and Ben Hardaway and ran in the vein of many of the Warner Bros characters of the time, such as Bugs Bunny and Daffy Duck.

I was never a big fan of Woody Woodpecker, so I wasn’t sure what to expect. A quick look at some of his cartoons – both old and new, revealed a character much in line with most of the Looney Tunes roster – save for a propensity for violence that was sometimes truly disturbing. (More so than Bugs Bunny, Elmer Fudd, or Wile. E Coyote) The movie pays homage to this with some disturbingly violent antics of it’s own. But if that were the only issue, my disdain for this movie could be chalked up to a difference in taste.

This film will not get off so easy.

The “Woody Woodpecker” 2017 movie stars Timothy Omundson and… some other people I didn’t care about enough to look up – and I have to say, I was so disappointed to see Omundson in this movie. He is a really funny character actor. In my personal opinion, he was one of the best things about “Psych” and the ill fated “Galavant”.  But despite a small handful of moments, this movie was trash from start to finish. 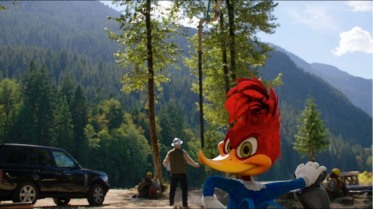 The story centers around Omundson’s character. He is a typical “corporate big wig” guy who doesn’t care about anything other than his bottom line. When his flippant attitude towards the environment results in some bad press for his company, he is fired. But he has a backup plan. His grandfather owned some land, and he is determined to go and build a mega mansion on it, so that he can sell it and net a huge profit. Enough to start his own business. Along for the ride are his socialite fiancee and his begrudging son, dropped of by his ex-wife. However, upon preparing to build, a pesky woodpecker reeks havoc, sabotaging his plans every chance he gets. It’s only by learning to cooperate with the woodpecker that Omundson’s character is finally able to build – both the house and (more importantly) a relationship with his son.

Seems like the typical kid movie fare. So what was wrong with Woody Woodpecker? Well, a lot.

My first indication that something was wrong was in Woody’s first appearance. They did a reasonable job of affecting the same sound as Woody the Woodpecker, but the glaring issue was how it sounded in comparison to everything around it. Woody’s voice sounded like a recording. It SOUNDED like it was recorded in a can, away from the scene being shot. As a viewer, we are aware that the CGI woodpecker is not really there in the scene, but the point is to try to make us forget that reality. The moment I heard Woody’s voice it was glaringly obvious that his words were recorded separately from everyone elses. What’s worse, the problem never corrected itself.

While we are on the subject of technical issues, it was also painfully awkward to watch the actors “interact” with Woody. More than a few times it was plain to see that they were not looking in the direction Woody was. You could see that the filmmakers tried to minimize the issue by limiting how often the actors would have to directly interact with with him – but man! There’s a scene where the son pets Woody on the head that is super cringey.

However, this is a STORYTELLING blog. Technical failures aren’t really my thing. So how did Woody Woodpecker fare as a story? Ugh. Well…

My biggest gripe with this movie is it’s characters. I found myself having a hard time getting invested in anyone. Every character is a “by-the-numbers” cardboard cutout. There’s the distant, corporate father, the snotty, child hating, young fiancee/new-wife, the emotionally shut off but ultimately misunderstood kid, the dumb hick villains, the kind natured, country girl love interest, and of course, the mischievous mascot that the movie revolves around. Any movie that features city people going into a small town has the same characters, and unfortunately, Woody Woodpecker does nothing to make these characters more interesting. In fact I’d go as far as to say that, with the exception of the dumb hick villains and Woody, they underplayed these familiar

character tropes, to the movie’s detriment.

The father was kind of a jerk, but not enough to warrant what was happening to him the entire movie. The fiancee was stuck up and (gasp) not a fan of country living, but she also put up with a lot of abuse that was also unwarranted. The son was annoying and bland – as were his little group of friends. The villains were way too dumb to be taken as an actual threat. The park ranger love interest was boring. And of course, there’s Woody himself. Woody was probably the most obnoxious, irritating, and nonsensical character of all. Half the time I couldn’t understand what he was saying, and when I could, I found myself agreeing with the dad. The bird needed to die!

I haven’t seen a bird that deranged and homicidal since Thankskilling! 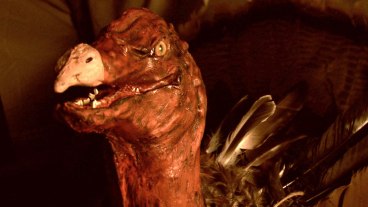 Seriously! HE BLEW UP THE FIANCEE! Just, friggin tried to murder her. And we’re supposed to see her as a bad person for packing her crap and leaving? And they all just kinda, push that to the side!

I realize that this is slapstick comedy. It’s an homage to the cartoon. This is the kind of stuff that you laugh at when it’s in cartoon form. But dear God! In a live-action kids movie, that’s just terrifying!

And, as I mentioned earlier, they really didn’t make her comically “evil” enough to warrant it. You’re supposed to dislike her because she’s the attractive, young girlfriend who encourages Omundson’s character to keep a distance from his son. But that’s the only issue they bring up. And when you see how the son talks shit about her, (right in front her, btw) you can understand why! The kid’s a dick to her! That’s not her fault. It’s his and his parents. And yes, I say parents, not just his father. Both! 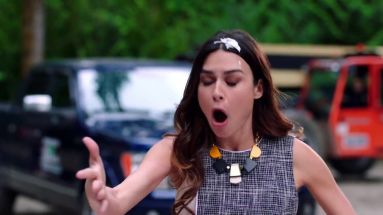 It’s far more satisfying as a viewer to see someone truly despicable get picked apart by the crazy bird. But the father and his fiancee were just building a damn house! It’s not even like the residents were against it! They just thought it looked big and gaudy! And Blue. WAY too blue!

The movie also fails to deliver a story that stretches the entire length of the run time. It pads the story with a sloppy talent show/town festival side plot that ultimately goes nowhere, and only serves to provide a few extra scenes to “humanize” the jerk kid and the psycho bird. But this leads me to my biggest gripe of the story.

Kid’s movies generally have very simple messages. Things like, the importance of friendship, or family, or following your heart. Hokey acting, simple stories, and cartoonish characters can be easily forgiven in a kids movie as long as it has the right message. Sadly, the only enduring message of Woody Woodpecker is, bribery works!

While simultaneously denouncing the greed of the father and the poachers, our “hero” only helped the son and later, the father, after they both gave him food. The relationship between the father and the son is the same. The son only began to open up to his dad after he got what he wanted (i.e the dad’s fiancee gone). Later, when Woody accidentally burns their house down, the son doesn’t even entertain the idea that Woody could have done it, despite the fact that this same bird gleefully blew up their RV and destroyed the house multiple times over the course of the movie. He immediately turns against his father again, and rushes off in righteous indignation to save Woody – only to get immediately caught and become a liability that his father must also save. In the end, the bad guys are arrested and we are supposed to believe that this is now a happy, functional family unit. But it is a unit built on just giving the person upset with you whatever they want. That’s not healthy!

In the end, Woody Woodpecker was a painful watch. It’s a kids film with a terrifying character, a hollow story, and a messed up message. I wouldn’t want my fur baby to see it, much less a human one! And the faster I remove that demonic image from my head, the better.